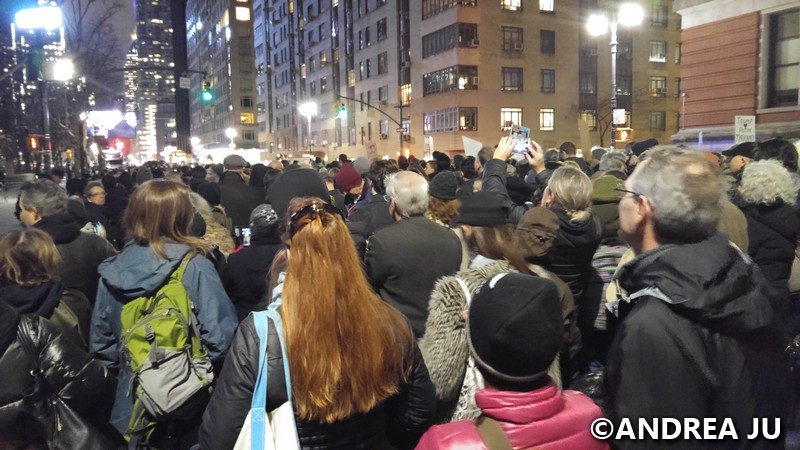 First of All – Thank You, NYPD. They have done an incredible job managing the crowds and the protests since Election Day. When the results came in and the people took to the streets protesting, the NYPD did a beautiful job handling the masses. It wasn’t a planned protest, the people of NYC were exercising their First Amendment Rights and I really enjoyed watching how the cops handled the situation. They did a magnificent job and it was beautiful watching a democracy at work. There were no riots, no violence, it was a nice sight. We know that law enforcement tends to be conservative and Republican, the way our cops have been doing their jobs is an example of what our lawmakers need to learn, both sides can work with each other, lawmakers just don’t want to. 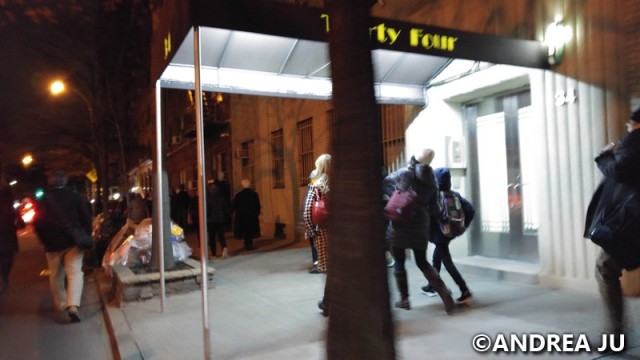 Meeting point for the rally was 1 Central Park West. The police directed us where to walk. We all walked to 66th St and Broadway and everyone was civil and orderly. Sorry it’s blurry, it was hard taking pics with my phone while walking.

Why most of us in NYC hate the illegitimate President? Because we see him for the con man he’s always been and he gives New Yorker’s a bad name. From an early age, most of us develop a bullshit radar. The entire campaign was an emblem of everything New York City isn’t about. We’re the melting pot, a city of tolerance. We have our issues but its not that bad, better than most places.

Giuliani totally turned his back on his city when he said, “Under those eight years, before Obama came along, we didn’t have any successful radical Islamic terrorist attack inside the United States.” That stung. I was never a fan of him but he handled 9/11 great. He ran down to the World Trade Center on 9/11 and didn’t go into hiding. That made me proud of him. Now I have contempt because he just shit on our city by totally forgetting 9/11 even happened. No loyalty to his city. New Yorkers usually stand by each other, Giuliani didn’t. He literally said that during the campaign.

Those two New Yorkers can go fuck themselves, they are everything we aren’t and they make us look bad. 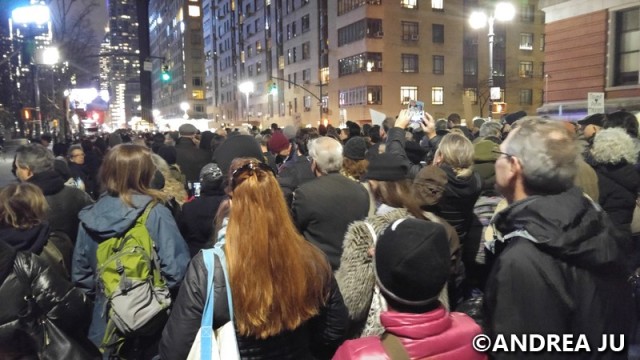 On January 19th at 6pm: Michael Moore, Mark Ruffalo, Alec Baldwin, Robert DeNiro, Cher, Rosie Perez, Cynthia Nixon, Natalie Merchant, & Mayor DeBlasio were some of the people that spoke last night. It was nice seeing everyone come together. There were tears in the audience, we feel sad but even when we’re down, we don’t give up. Considering the rally was put together in a week, the crowd down Central Park West faded into the horizon. It was a sight to see. It was peaceful, it was crowded but not too squished in, people were pleasant and polite. 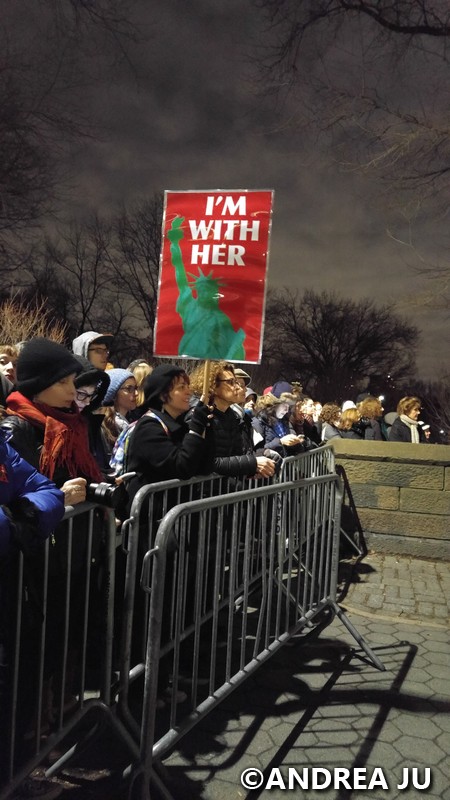 Last night was everything New York is about: Tolerance, diversity, creativity, we are a cultural hub. Being a part of the 25,000 people at the rally felt good. We all enjoyed each others company. New York City is still New York City. No matter how tough things get – we fight and everyone there was/is ready to fight.

Don’t be silent. Fight for your rights. 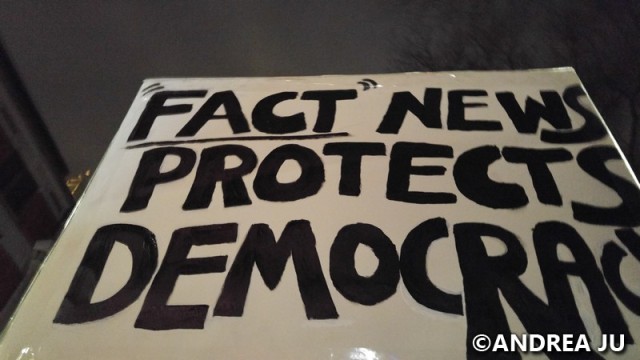 Both sides the liberals and the trump supporters have to stop hating each other. It took me a long time to realize there are non racist people that voted for Trump. We just see him differently then they do since we’ve been living with him all our lives we have a different picture. We may not agree on all issues but the ones we do we should stand up for together. That cabinet that was suppose to be drained of the swap is swampier than before, filled with billionaires that have no experience. I don’t trust billionaires, they don’t know what it’s like to worry about where your next meal is coming from, they never had to. They have too many monetary conflicts of interests, don’t trust that either. 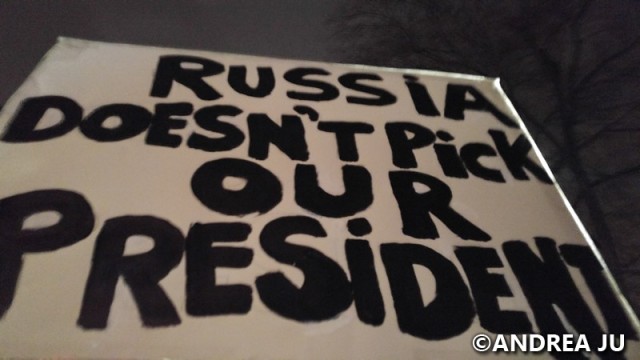 You know me from my blog, where we, Vic and I, travel and go on these trips. We grew up poor and lower middle class in inner city neighborhoods. We feel its our patriotic duty to pay our taxes to help our fellow Americans unlike the illegitimate President who won’t even disclose his tax returns and openly admitted to not paying any. We donate to charities and volunteer our time. We’re trying to figure out what charity to work with next. Now is the time to be more hands on because the disadvantaged are going to need us and we won’t stand by and let them starve. In a country this wealthy, its sad how many people are homeless and go hungry. I was brought up with the attitude to help the person next to you, not every person for themselves.

Need to end this on the NYPD.

There was this adorable cop last night, he was standing on our route to the train station. Everyone was looking him in the eye, smiling and telling him thank you, thank you for keeping us safe, etc.  He was beaming, kind of a bubbly attitude, and looked really happy to be there for us and he said to all of us, “Have a good night too.” You had to be there and see it. He looked really happy to be serving us and proud of it. He was very happy we were all acknowledging the hard work they do in sacrificing their lives to serve and protect us. They don’t get the recognition for their sacrifices enough. 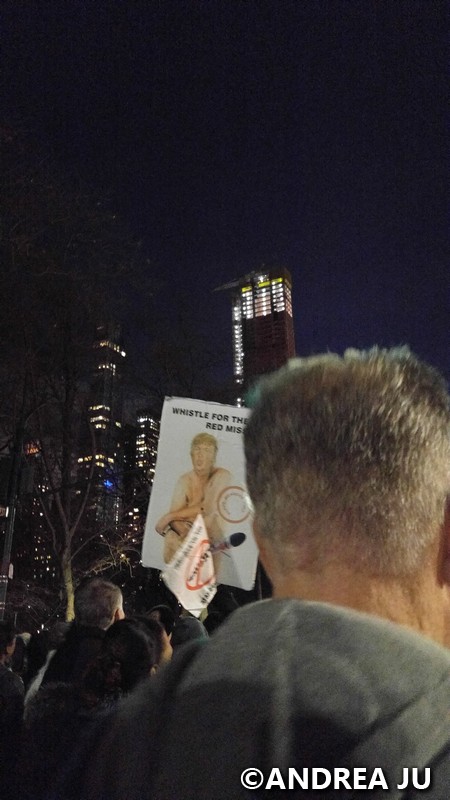 2 thoughts on “We Stand United Rally in NYC”